FBMonLogger can connect to Firebird database with performance problems and identify what is the reason of slowness: is it some user attachment, slow SQL query or long-running transaction?

FBMonLogger supports Firebird 2.1, 2.5 and 3.0 – for older Firebird versions or InterBase please use FBScanner.

After connection to the database where you want to find performance problems, several snapshots of monitoring tables should be done – click on «Get Snapshot» to take snapshot. 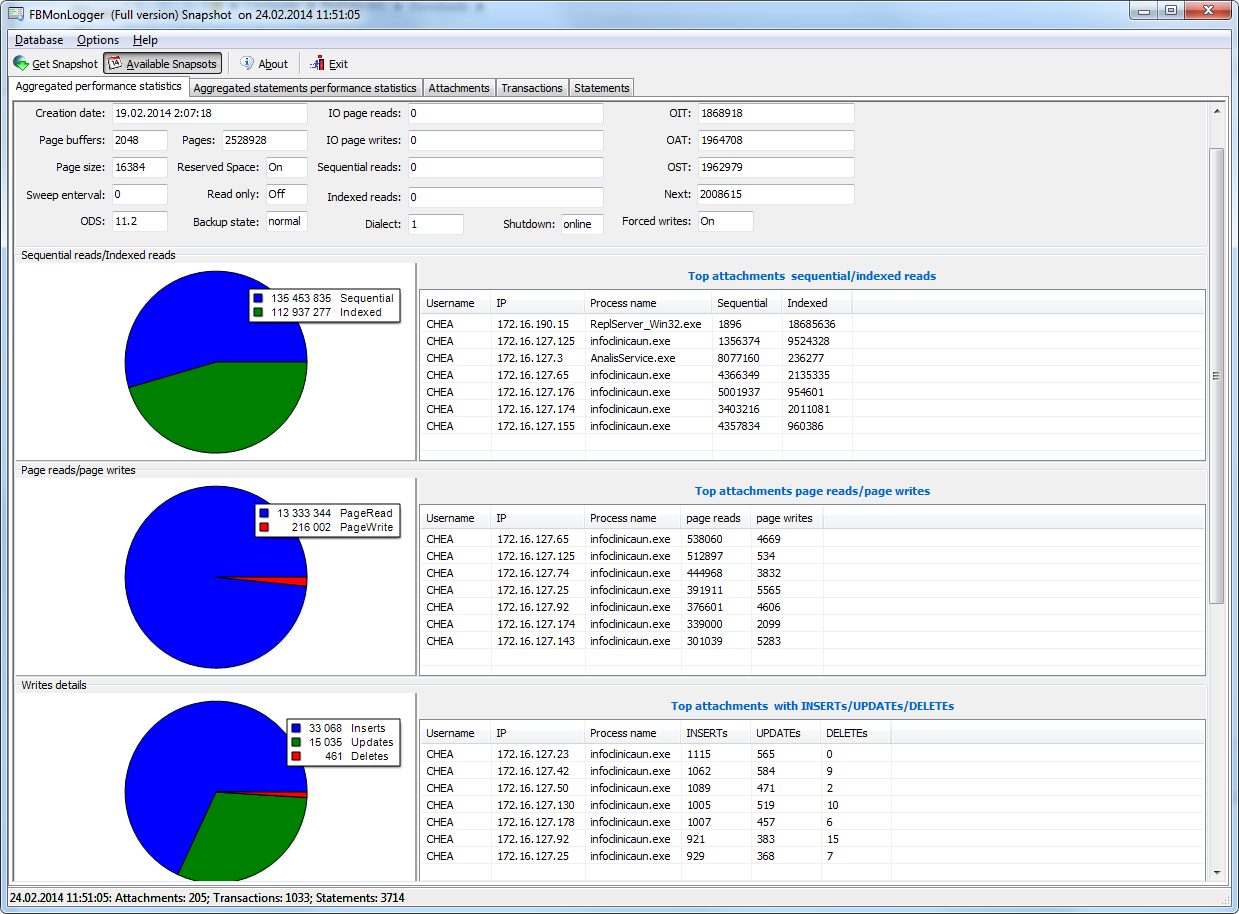 At the first screen we can see aggregated statistics for database connections, and identify connections with the biggest problems:

«Write details» gives you an overview of write operations: ratio between INSERTs/UPDATEs/DELETEs among all database attachments. In the table of top writers you can see attachments with the biggest number of write operations. It is useful to identify applications or software modules which performs excessive number of update or deletes (which are the most dangerous operations in terms of garbage collections).

Usually we can associate purge with UPDATE operation, Expunge with DELETE, and Backout with rollback of INSERT or UPDATE. Many backouts could mean that there is a problem with transaction management in the application.

«Memory usage» graph shows us total memory used by all active attachments now, and peak of allocated memory for them in the past.

List of top attachments by memory usage shows us the biggest memory consumers among your attachments. It is useful to find applications or software modules with excessive memory usage. 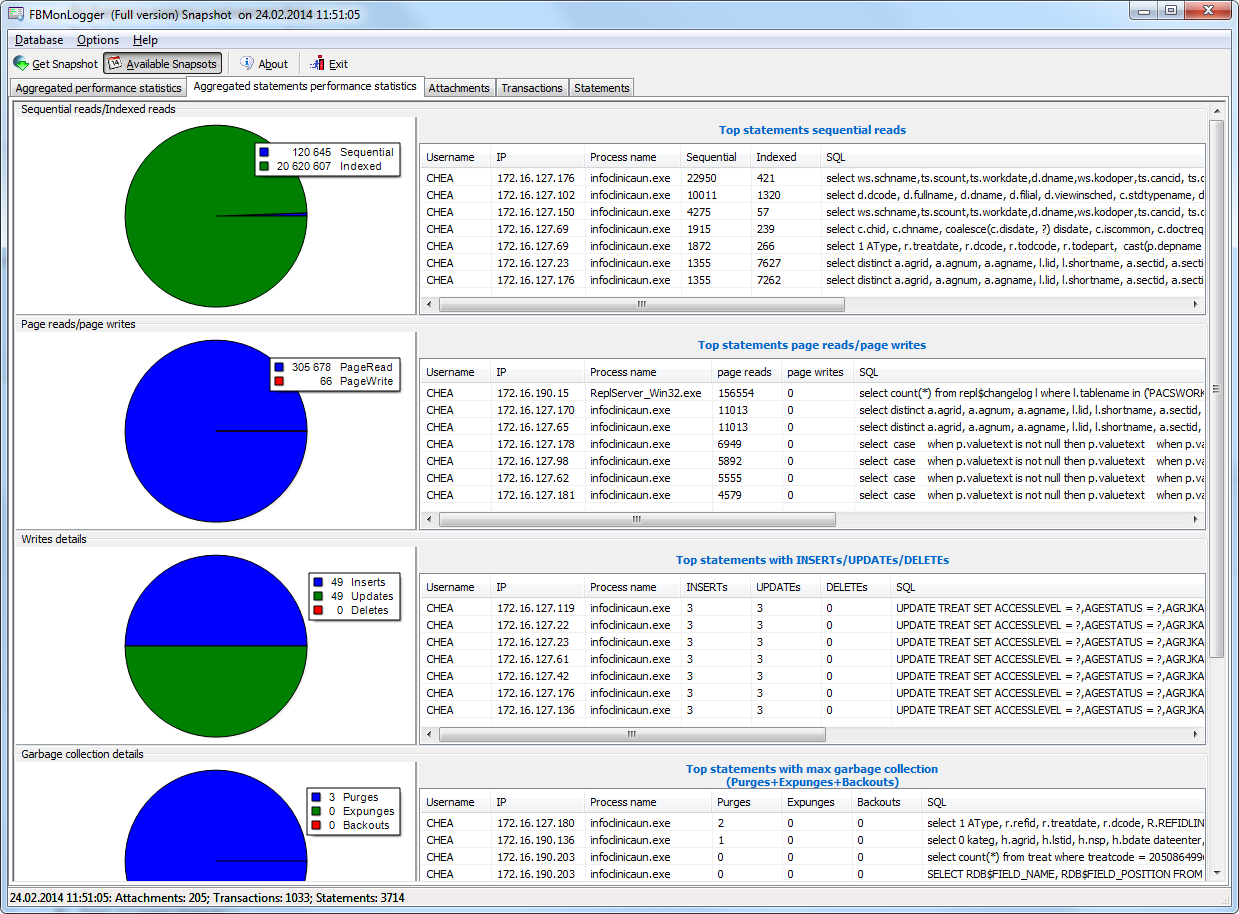 At the second tab you can find aggregated performance statistics for statements. This statistics better reflects the momentary situation in the database – since monitoring tables collect information since the beginning of each object life, statements you can see here are those which were running during the moment when snapshot was taken.

In this list we can see top statements which perform many sequential reads from the database. Usually such statements require SQL tuning – either through indices tuning, or through SQL query redesign.

To tune the query, check its execution plan: usually it is possible to improve query speed by eliminating NATURAL in plans with new indices or query redesign. Click on the statement in this list to open tab «Statements», where you can find more details about selected statement, and jump to associated transaction or attachment.

This graphs and list shows brief information about top statements which perform many reads – it means that they consume significant IO and can affect performance of other queries. SQL statements with peak values should be carefully checked for optimal performance.

At this graph you can see what writing SQL statements were doing at the moment when snapshot of monitoring tables was taken, and identify UPDATES and DELETEs which made many changes in the database

At this graph we can see how many garbage collection operations were done by statements running at the moment of snapshot.

Unlike aggregated memory usage statistics for attachment, statements' memory usage can show us list of exact statements which consume a lot of memory at the moment.

The third tab is «Attachments». You can open this tab directly to jump there by clicking one of the records at «Aggregated performance statistics».

By default some of columns of attachment are switched off, to show only most important information.

Of course, every time you click on attachment, you can jump to transactions running inside it, and then to statements. There is a checkbox in the left upper corner of Transactions and Statements tabs, which controls the behaviour – when checked, only transactions and statements marked by selected attachment ID, will be shown. 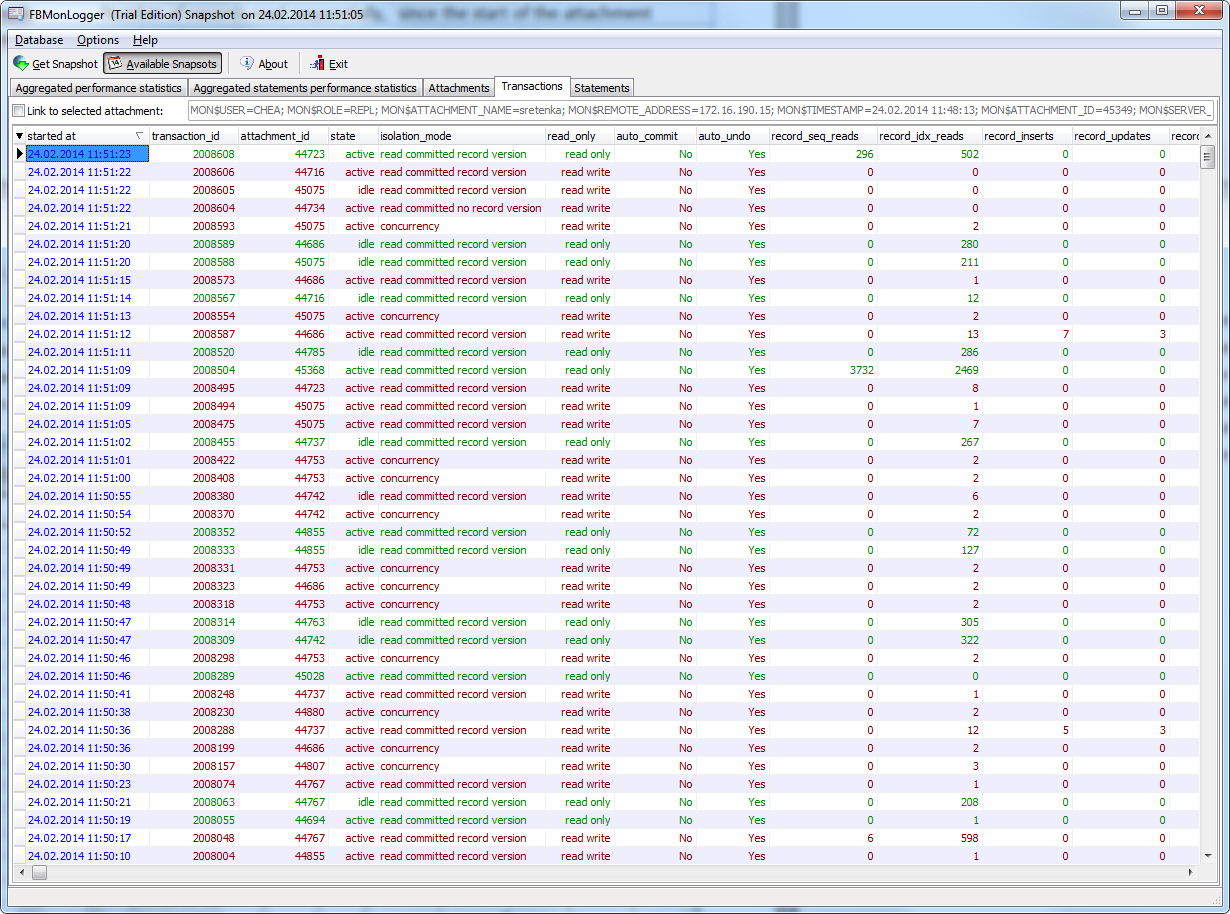 Sort on «started at» column and look for old transactions, marked in red: all writeable transactions and read only snapshots stuck Oldest Active Transaction and provoke excessive record versions to be hold. Identify where these transactions started (right-click and select «View parent attachment») and fix your code to commit this transaction earlier. 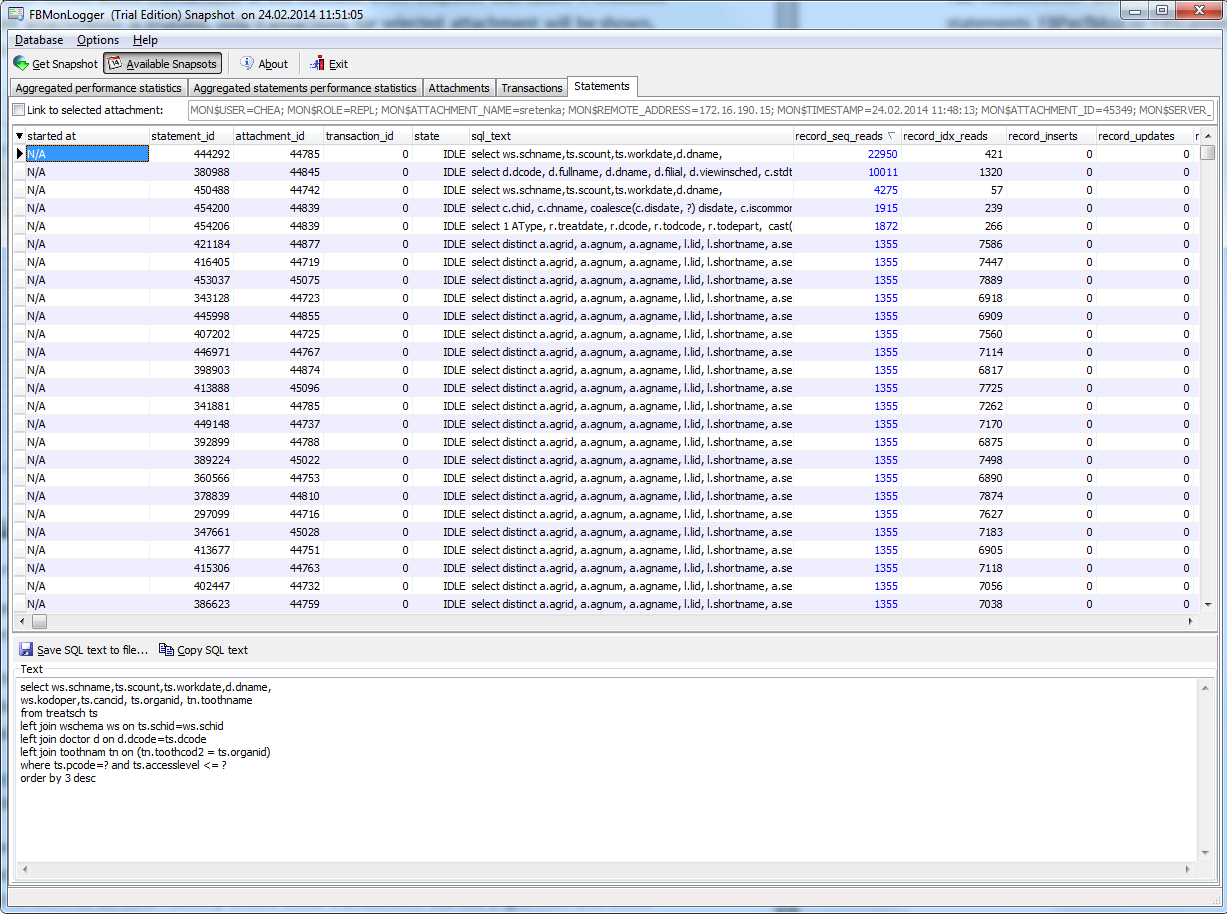 Tab «Statements» shows statements active at the moment of snapshot: if you need to catch all statements FBPerfMon or FBScanner should be used (all these tools are part of IBSurgeon Optimization Pack).

If «Link to selected attachment» is enabled, only statements for specific attachment will be shown, otherwise all active statements are in the list.

Some statements have no associated transaction id (=0): these queries are prepared, but not executed.